Did you just buy what they think they just sold? 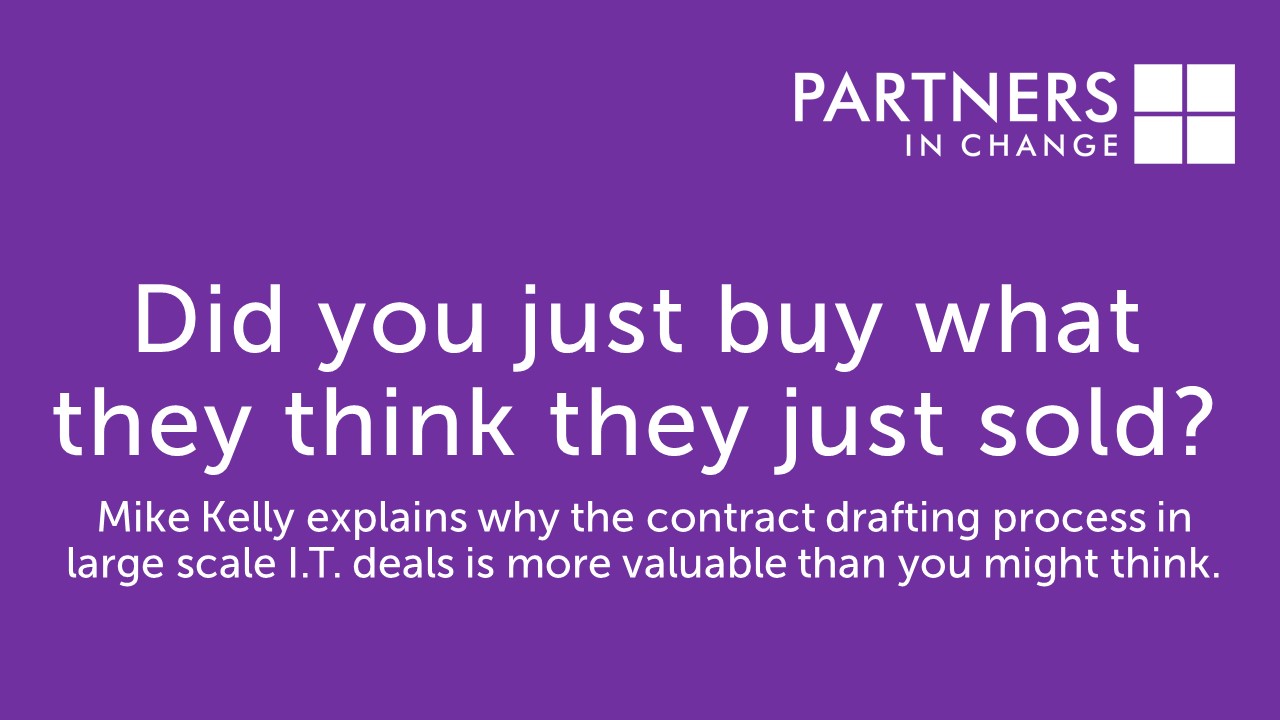 Did you just buy what they think they just sold?

Did you just buy what they think they sold?

IT services contracts tend to be weighty and they tend to be complex. This isn’t a surprise when you understand they effectively underpin the core delivery engine of most modern organisations.

Here in my home office there’s a trophy shelf with some personal ‘greatest hits’ on display – each one thicker than your typical blockbuster novel. Who writes this stuff and, more importantly, who reads this stuff?

The answers are, respectively:

Creating these contracts typically costs 1% – 2% of the total contract value – a huge amount of money given the fact they rarely get opened. So what is the point of them?

In my early years, working in the sales function, I hated the contracting process and the headache of having to fend off “helpful” legal teams asking question after question about the perfectly good deal I’d just sold.

My boss at the time took me aside and said something very wise: “Stick with it. The magic is in the deal”. I didn’t really understand it then, but for some reason it stayed with me and a few decades later I’ve come to recognise this as a piece of highly insightful advice.

Invariably, often early in the contracting process, misalignments emerge between what one party believes has been sold and the other believes has been bought. This can be a shock, but the reality is that at this point the contract isn’t signed and the sale is not complete. When this issue arises pessimists might suggest the inevitable darkness is falling, with all parties primed for the first (of many) disagreements. Optimists might however suggest that this is simply a step in creating the right conditions for sparks of magic to fly.

Whether the optimist or pessimist is right depends largely on the effective management of the contracting process. This process can last from a few days to several long months for larger deals. Handled well, this is a perfect opportunity for the buyer and supplier to work together on their first joint delivery challenge – the creation of a legally binding statement of how they will work together after the contract is signed, what will be paid when, and what happens in the highly unlikely scenario that something should go wrong.

It’s a fantastic opportunity for the project lead (or specialist advisor) to coordinate this process in such a way that, rather than creating division, mutual trust and respect is built as the details are thrashed out. This requires patience, clarity, listening and understanding from all involved as issues and risks are surfaced, explored, escalated and resolved to the satisfaction of delivery, legal, finance and management teams on both sides.

This is an exhaustive (and often exhausting) process but, when finally completed, all parties will have a much more realistic understanding of the balance of risk in the deal and be better placed to sign than back when that muddled and sketchy RFP was drafted, or when the first wildly optimistic bids were submitted. Even more importantly, there should now be some real mutual trust established. This will be key to tackling the challenges that will be faced once the delivery work begins and the client and supplier teams start working side by side.

For large IT services deals, don’t ignore the value of an effective contract drafting process. It’s the first big test of whether client and supplier can work together effectively. Handled well, it can be a hugely positive step in establishing a relationship based on mutual trust and understanding, saving time, effort and stress downstream as the inevitable delivery challenges surface.

*PiC’s specialist negotiation team have deep experience supporting client legal teams with business-critical deals. We can help accelerate the contracting process and create deals based on trust that deliver long term value for suppliers and for your business.

One Response to Did you just buy what they think they just sold?